An explosion occurred during the dismantling of the passenger ship at Aliağa METAŞ Ship Breaking in İzmir. 1 worker died in the explosion, 1 worker was seriously injured.

There was an explosion at METAŞ company in Aliağa Ship Breaking Facilities, 1 worker lost his life. 1 worker was seriously injured.

During the dismantling of the passenger ship at METAŞ Shipbreaking Company, an oxygen explosion occurred while the water was being discharged on the bottom floor. According to the information received, there was an explosion due to gas compression. It was learned that the workers working on the upper floor heard the explosion and informed the emergency teams.

While one worker was taken to Bozyaka Training and Research Hospital with serious injuries, the body of the other worker was found after hours of work.

WRITTEN EXPLANATION FROM THE COMPANY

METAŞ Ship Breaking Inc. In the statement made by the company, “As a result of the explosion that took place for an unknown reason on the ship in our facility to be dismantled, a worker lost his life and another worker was injured and taken to treatment in the burn unit at İzmir Bozyaka Training and Research Hospital. While the technical and forensic investigation regarding the incident continues, our company authorized While wishing God’s mercy on our brother who lost his life in the incident, patience and fortitude for his family and loved ones, and a speedy recovery for our injured worker, we declare that we are with the families of our worker brothers and sisters who lost their lives and were injured in this tragic accident that deeply injured us. After the necessary investigations regarding the accident are completed, a detailed explanation will be shared with the public.” it was said. 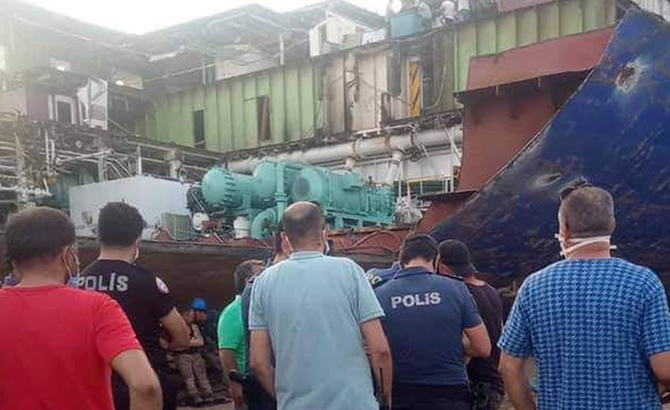