The Global Mercy civilian hospital ship prepares for its maiden voyage to Europe in its final step before starting operations on its first mission in Africa. Built at the Tianjin Xingang Shipyard in northern China under the project management of Stena RoRo, the ship left the shipyard with a traditional ceremony.

Per Westling, Managing Director of Stena RoRo, said: “We are proud to take delivery of this special ship. Due to the activities to be performed on board, there were certain specific and strict demands on shipbuilding. However, this ship was successfully built, a first for the shipyard.”

ON THE AFRICAN SHIELDS WITH THE MALTA FLAG

Known to have detailed designs prepared by Deltamarin and built at Tianjin Xingang Shipyard in China, the 173-meter-long ship, classified by Lloyd’s Register, will operate on the African coast under the Maltese flag.

The ship will first go to Belgium, where medical equipment will be installed in the coming months. It will then watch to Rotterdam to be presented to sponsors, volunteers, the media and other interested parties. After that, the ship will be ready to cruise to West Africa for service in Dakar, Senegal.

Mercy Ships’ mission is to provide free healthcare in the poorest areas of the world. With the Global Mercy ship, Mercy Ships will for the first time have a ship designed and built for the organization’s specific needs. Previous ships, although smaller, were converted from ships in other segments to hospital ships.

The ship has 6 operating rooms, a bed for 200 people, a laboratory and an eye clinic. The ship will operate with a crew of 641 and medical personnel. The ship will also feature dental clinics as well as a number of shore programs, including community health education.

Global Mercy is expected to arrive in Senegal in early 2022 for its first mission. 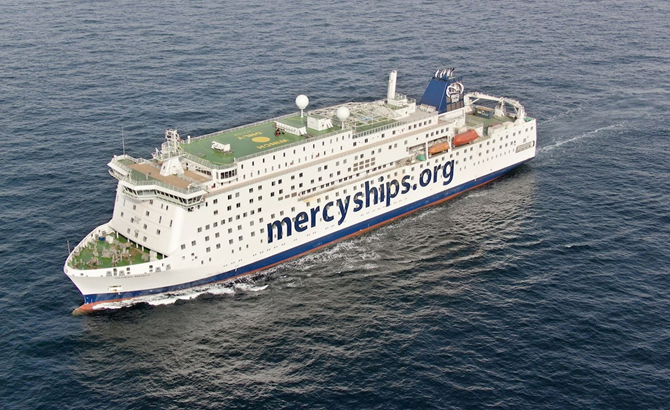