Güzelyalı Yacht Harbor, which was transferred to the Metropolitan Municipality by the Ministry of Transport and Infrastructure, was completely renewed. It added value to Güzelyalı for the marina, which has a completely modern appearance from its infrastructure to its superstructure and is protected by security personnel and cameras 24 hours a day.

In order to highlight the coastal city identity of Bursa and to ensure that it gets the share it deserves from summer tourism, the Metropolitan Municipality, which carries out intensive work on the 115 kilometers of sea coast on the borders of Mudanya, Gemlik and Karacabey, has signed off on another project that adds value to Mudanya.

Bursa Metropolitan Municipality, which took over the marina part of the Güzelyalı Yacht Harbor and Fisherman’s Shelter, whose construction was completed by the Ministry of Transport and Infrastructure in 2003, renewed the port from the beginning.

Within the scope of the works, the entire port was surrounded by wire fences to ensure area security, and a fixed pier was built for the fishing boats that moored on the rocks in the breakwater area. Security cameras were installed covering the entire area, while 24/7 security personnel were assigned to ensure area security. The lighting poles and system, which create a security weakness in the port and do not meet the needs of the users, have been completely renewed. While the fire extinguishing system and card pedestal (water and electricity system) were installed, landscaping was also done.

NO ARTICLE FROM THE OLD VERSION

Bursa Metropolitan Municipality Mayor Alinur Aktaş examined the works carried out at Güzelyalı Yacht Harbor and shared their investments with the public. Speaking at the inspection tour attended by the Ministry of Transport and Infrastructure Bursa 4th Regional Manager Yusuf Taşkan, Mudanya Port President Veysel Yaşar, AK Party Provincial Deputy Chairman Mustafa Sayılgan, AK Party Assembly members and the district organization, President Aktaş said that the old version of the port, which is known by everyone, has a modern look. He said he got it. Noting that a contract was signed with all the boats in the port and the accommodation became official, Mayor Aktaş said, “Every work that needs to be done, from the administrative office to the shower units, has been done. A vault system was built from scratch inside the port. Fixed personnel were assigned to ensure port cleaning. Currently, around 150 mooring requests, together with fishing boat and yacht demands, are pending. Priority of the contract was given to the boats already in the port before the transfer. In order to support sportive development, a place was allocated for the rowing team in the port. I wish the Guzelyali Yacht Harbor, where we have invested approximately 3 million TL since its operation was handed over to us, to be beneficial.”

THE SERVICE HAS NO POLITICS

Reminding that as the Mayor of Bursa Metropolitan Municipality, he is also the mayor of Mudanya, Karacabey, Yenişehir, İnegöl and 17 districts, Mayor Aktaş emphasized that they never differentiate between political parties in terms of service. Stating that he is proud to walk hand in hand with every non-governmental committee and mayor who has a concern and enthusiasm for his district, regardless of their political views, Mayor Aktaş said, “We may have council members and mayors elected from different political parties. I respect. After all, the opinion of the citizens is valuable and valuable to us. There are issues that are under the jurisdiction of the metropolitan municipality, there are issues that are under the jurisdiction of the district municipality. You have to fulfill the responsibility you have taken within your authority. You know, in the past period, Recep President and Hasan President understood the time and built a pool here. The Metropolitan Municipality has spent 7-8 million liras in today’s money. The president changed in 2014. I took office in November 2017. They started court proceedings regarding the pool. I’ve spoken in person, ‘swimming pools don’t make money. You have so many expenses in a year. Let’s not go into such a process. As a result, we both transferred the pool and were sentenced to a compensation of around 700 thousand TL, although the metropolitan city made all the investment. As a result, this event was declared as a ‘victory of law’. This is not a victory of law, it is evil for Mudanya. Finally, we transferred it, 2 years later, there is still no click in the pool. There is no swimming pool in Mudanya. But now we built a pool in the garden of the Armistice Primary School. Our children will learn to swim here,” he said.

Expressing that they have invested 200 million TL in Mudanya in the last 3.5 years, President Aktaş said, “We are trying to be immediately involved in every problem in the infrastructure and superstructure. ‘No BUDO is sold’, ‘They couldn’t clear the mucilage’. I don’t have time to spend with this kind of love. We have to do business. City, country cannot be governed by perception. We have a problem. We want everything to go smoothly. We made a decision about Güzelyalı, we showed a will. It has years of problems. I don’t even have 1 square meter of space. I have inherited this city. We will eliminate the problems in order to protect this trust we have received. We announced the decision, the next day it was said that they are making a perception. The law has authorized 1/5000, 1/25000 plans. Thousands of people are sitting. Cursing the darkness is not a solution, and you don’t have a light. See what you can do within your competence to resolve the issue. It takes strong willpower to resolve these issues. We are the local administrator. If there is a problem, as the Metropolitan Municipality, I will do my best to solve it. We have things we have done, we have work in progress, we have things to do. I would like to thank everyone who supported our work.”

President Aktaş also met with the tradesmen within the scope of the Mudanya program and examined the ongoing investments in the region. 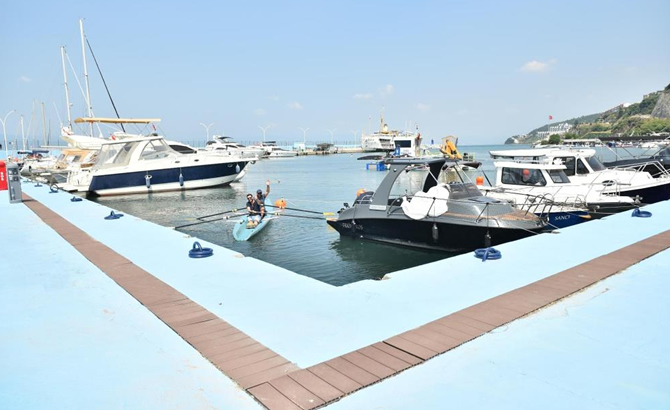