IMM started a support program for small-scale fisheries. A total of 1,200 fishermen with boats under 12 meters will be provided with parcels containing “epoxy putty”, “antifauling paint” and linoleum fishing overalls.

Istanbul Metropolitan Municipality (IMM) has started a similar support to small-scale fishermen, which it gives to farmers engaged in agriculture and animal husbandry.

In the event held in Silivri Fishermen’s Shelter in Piri Mehmetpaşa District, the first speech was made by the Fishermen’s Cooperatives Union President Erdoğan Kartal.

Pointing out that today is a historical day for fishermen, Kartal emphasized that impoverishment started when fish decreased. Expressing his thanks to İBB for their support in this sense, Kartal expressed their demands for taking steps towards the recognition of fishing as a profession.

“YOU BRING US HOPE”

Barış Köksalan, Vice President of the Fishermen’s Cooperatives Union, said to İmamoğlu, “There is not only paint, linoleum, etc. In these boxes, you brought us hope, my President, to cure the broken hopes of fishermen who were victims of both the pandemic and mucilage. In this regard, we thank you very much. So hope is more valuable than anything else. It is more valuable than those paints, those that can be bought. When you came to Istanbul, you already came with hope; maybe you brought us those hopes by putting them in boxes. You understand the institutions you call the state when you see them with you when you are most pessimistic. We, as fishermen of Istanbul, were in a sense of pessimism. I hope that this pessimism will also be lifted with these projects.”

“IMM AND WE HAVE A RESPONSIBILITY TO KEEP MARMARA CLEAN”

Speaking at the event, Silivri Mayor Volkan Yılmaz stated that Istanbul, which has 2 seas and 1 strait, cannot benefit from fishing sufficiently.

Saying, “For this reason, I would like to express my gratitude to them on behalf of the people of Silivri, on behalf of our Silivri Fishermen’s Cooperative and its members, for the small but significant support they have done here today to both our President and his valuable team.” underlined that they will

Emphasizing that all state institutions are responsible for the mucilage problem in the Marmara Sea, Yılmaz said, “60 percent of the domestic and industrial waste in the Marmara Sea originates from Istanbul. So; IMM, we and district municipalities have a responsibility to keep the Sea of ​​Marmara clean and to keep the environment clean. Together with the government, IMM should assume the locomotive power here. Izmit Metropolitan Municipality needs to assume the locomotive power so that we can protect these seas, which are entrusted not to our children, not to us, but to us,” he said.

“WE ARE HERE TO CONTRIBUTE”

Saying, “Today we are here to provide morale, hope and a contribution to our fishermen”, İmamoğlu said, “As long as we have strength, we consider ourselves absolutely responsible for contributing to our citizens, tradesmen and different professional groups in difficult times in every respect. We sit at the table and make decisions by saying, ‘We must do something. We are touching as a result of these decisions.”

Expressing that they primarily contribute to healthcare workers during the difficult pandemic process, İmamoğlu said, “Right now, we have to help other groups. There is no need for populism, creationism or opportunism over these concepts. This is how you should behave. In this context, we are still with our fishermen today.”

“MUNICIPALITIES ARE NOT THE SOURCE OF THE RISE ISSUE”

Noting that a new challenge has emerged for fishermen with the mucilage issue in the Marmara Sea, İmamoğlu pointed out that Istanbul has come to a good point in advanced biological treatment with the investments made from the past to the present.

Stating that they aim to increase the advanced biological treatment rate from 60 percent to 100 percent, İmamoğlu said to the opposition that prevented the increase they wanted to be made in İSKİ, “As of now, the hike in electricity is almost 50 percent. As İSKİ, we pay almost twenty percent of our budget as electricity money. İSKİ has electricity bills exceeding 1 billion 200 million. Let’s know this, my dear citizens: The source of the raise issue is not the municipalities. It is neither Silivri Municipality nor Metropolitan Municipality. The source of the raise is the government; economic system. That’s it. 2 times 2; He said it’s 4.

Pointing out that İSKİ, which plays an active role in mucilage cleaning, works in Silivri, Tuzla, Sultanbeyli and Beylikdüzü, İmamoğlu said, “It will continue to work; responsibility. But ‘We don’t do water hikes…’ So it’s funny. One day, for example, the headline was in the media: ‘We do not make water hikes to İSKİ.’ Applause. But after 1 day, there is no click in the 15 percent electricity hike! “This is not an issue where our people will be deceived,” he said.

Expressing that they strictly obeyed their duty in the works carried out with the understanding of mobilization on mucilage, İmamoğlu underlined that they did not make the issue a matter of politics in any way.

İmamoğlu, who finds it wrong to hold the İBB responsible for mucilage, said, “Everybody’s problem is Ekrem İmamoğlu. Why am I saying this? Let’s fight together. Yes, mucilage is a serious plague. It is a calamity. Let’s take our lessons together and go about our business. Let’s turn the whole of Istanbul into biological treatment. But let’s develop country policies in order to manage the process rationally, not to pile up industry on the Marmara shores, where we have accumulated 50 percent of Turkey’s industry. Let’s stop crowding one out of every 3 people on the shores of Marmara; Let’s strengthen Diyarbakır, Hakkari, Kastamonu, Çorum and Artvin.”

Pointing out that everyone should take the necessary lessons from the process and come to the point where they are accountable to the citizens, İmamoğlu said, “There is a bigger account. Let’s talk about mucilage, but not the channel (Concrete Channel). Not so. If you talk about mucilage, you talk about the channel. Why are you talking about the channel? You will speak with science and reason, not with what Ekrem İmamoğlu said. Not with what someone else said: with science. What does science say bro? Science says, ‘If the canal is built, Marmara ends.’ Very clear. I beg those who defend the opposite: ‘Give me an address, I will come. Tell me. I have made several calls to Mr. invite me. Let me come and say to me, brother, ‘This science is wrong. The canal does no harm to Marmara. Convince me. Just someone wants it; so. The only thing we know. If we’re gonna talk about mucilage, we’re gonna talk about the channel. Because a greater threat lies there. Therefore, may God protect our seas,” he said.

THE DISTRIBUTION OF COLLEGES HAS BEGUN

After the speeches, İmamoğlu presented the aid boxes to the fishermen named Neslihan Uslular, Hüseyin Köksalan and Şahin Üstün, who were called to the platform. The Directorate of Agriculture and Fisheries, within the scope of the IMM Headquarters and Food Department, started to collect requests on March 25, 2021 from the owners of a total of 1,685 boats with 34 plates, under 12 meters and fishing licenses. After a 1-month claim collection process, a total of 1,200 small-scale fishermen were entitled to benefit from IMM support.

The materials to be distributed to the fishermen within the scope of the support will be as follows: 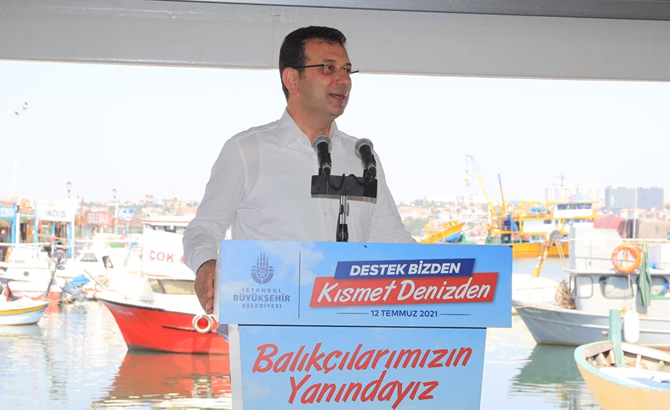 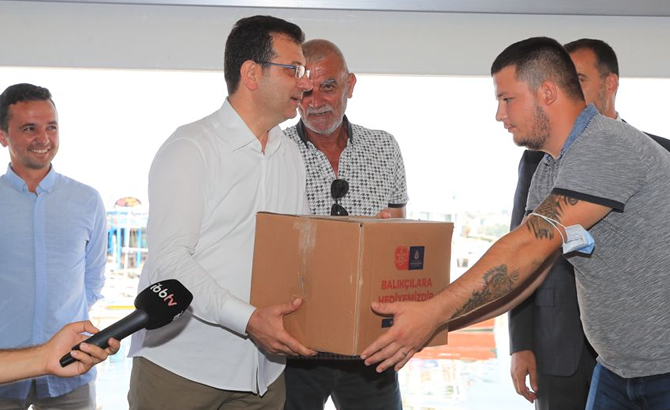 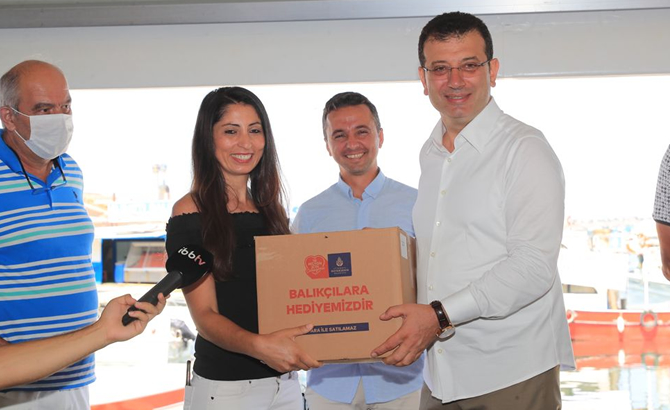 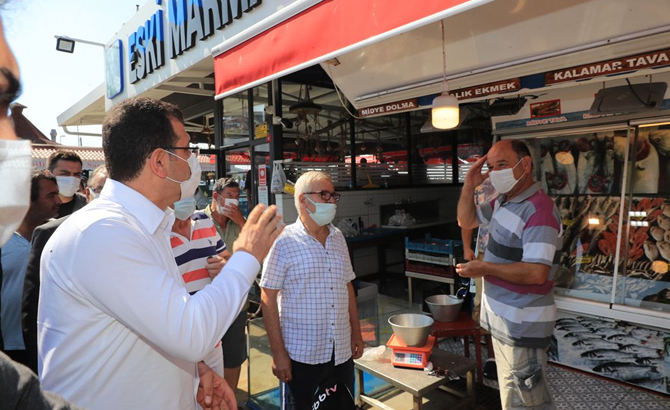 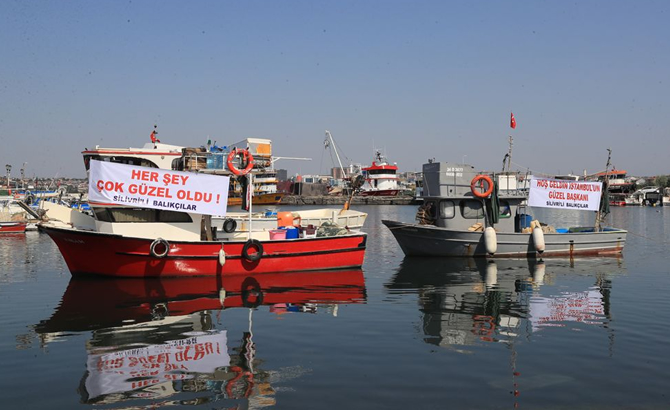