The Icelandic Coast Guard was called to assist with the rescue of a stranded ro-ro ferry after the vessel reported that its main engine had failed. Through a coordinated effort, the vessel was safely towed into a harbor on the west coast of Iceland after a 24-hour ordeal for the passengers and crew.

The 1,677 gross ton ferry Baldur makes daily runs between Brjanslaekur in the north to the port of Stykkisholmur. The trip normally takes approximately three hours to cross the Breidafjördur Bay depending on weather conditions.

The ferry, which has a capacity for up to 280 passengers and 49 cars, had departed Brjanslaekur with 20 passengers and a crew of eight on what the authorities were calling an extra run for the day. Approaching the middle of the bay yesterday in weather that was reported as a “yellow alert,” the ferry’s main engine failed and the crew was unable to restart it.

The ferry radioed the Coast Guard for assistance around 1:30 p.m. local time with a patrol boat dispatched but not expected to reach the stranded ferry before late in the evening. A nearby fishing research vessel, the Árni Friðriksson, offered to assist and was able to get a tow line established to the ferry. They were however reported to be making slow progress in the choppy seas.

A Coast Guard helicopter was dispatched to the scene and offered to assist. They proposed to airlift the passengers to shore but the passengers declined preferring to remain aboard the ferry. Local news reports said that the crew was keeping the passengers warm and food was being served from the onboard snack bar.

Complicating the situation was the fact that the fishing vessel that had the ferry in tow was too large to enter the destination harbor. Due to the cold and windy conditions, it was decided to transfer the tow to the Thor, an Icelandic Coast Guard patrol ship, that arrived on scene late last evening. However, the Coast Guard ship was also too large to maneuver the tow to the dock so a local tugboat was reserved to complete the tow when the vessel arrived at the harbor and when weather conditions would permit.

The tugboat Fonix completed the towing operation around mid-day today. The Baldur was docked in Stykkisholmur with all of the passengers and crew unharmed. It had taken nearly 24 hours to complete the expected three-hour trip.

Members of the Icelandic parliament immediately seized on the incident calling for support to upgrade the vital ferry service. They pointed out that the current vessel is 42 years old and that due to the weather conditions on the year-round route a new vessel with two engines and backup power should be provided. 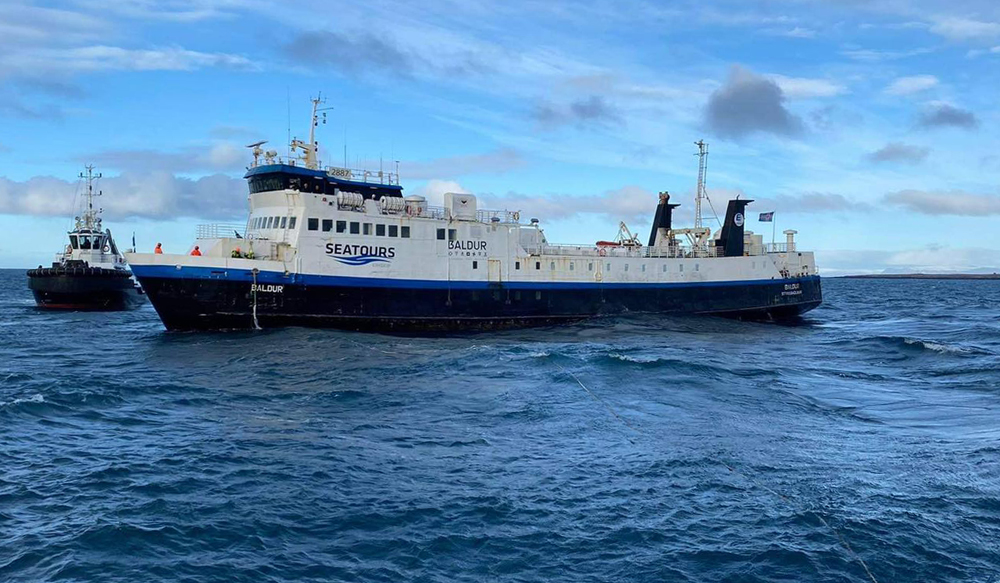 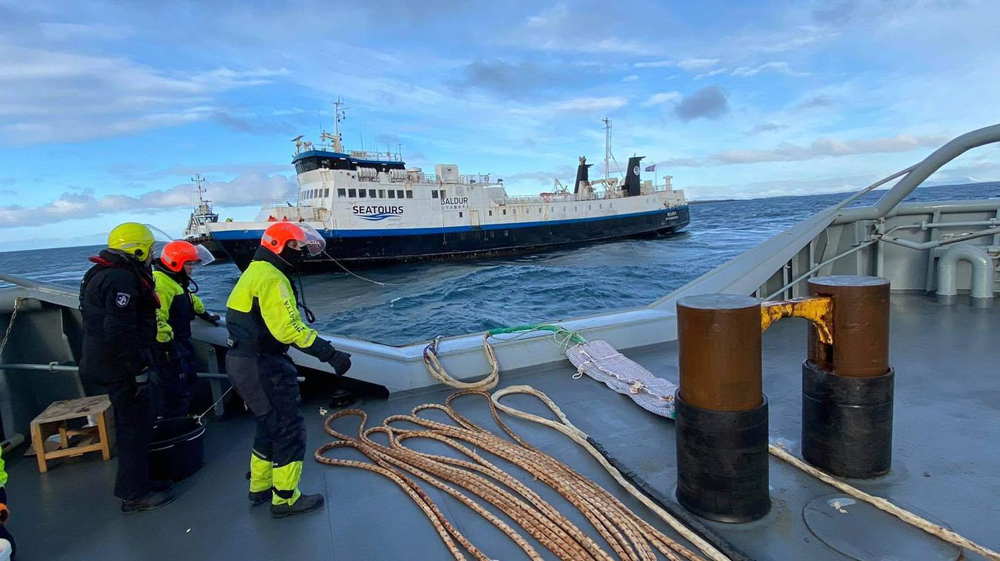 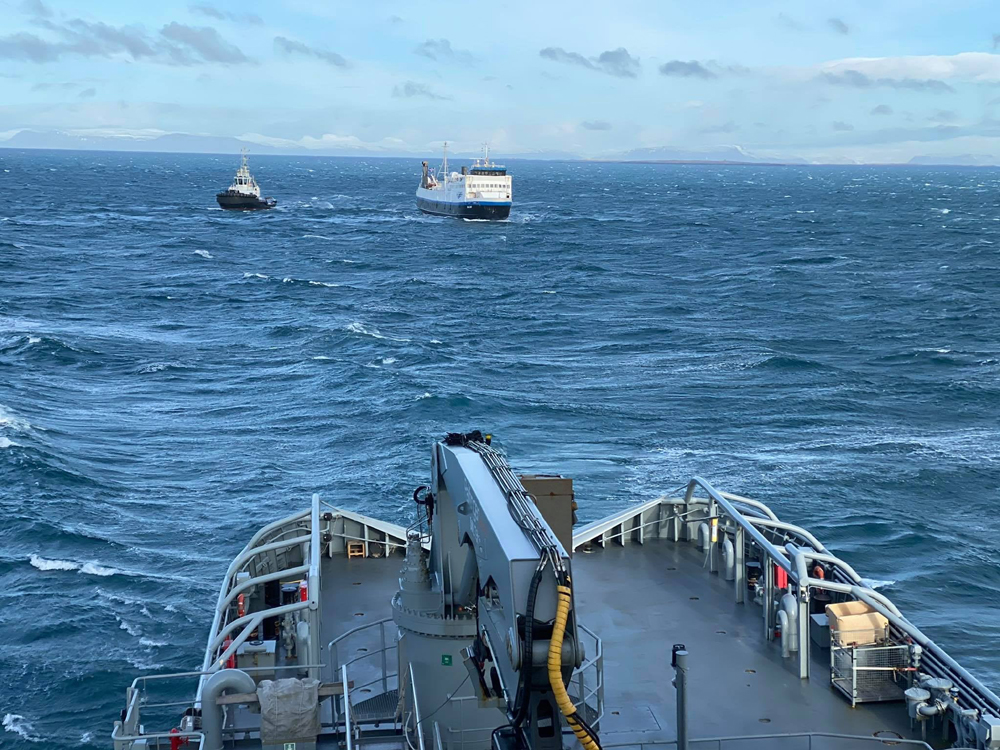 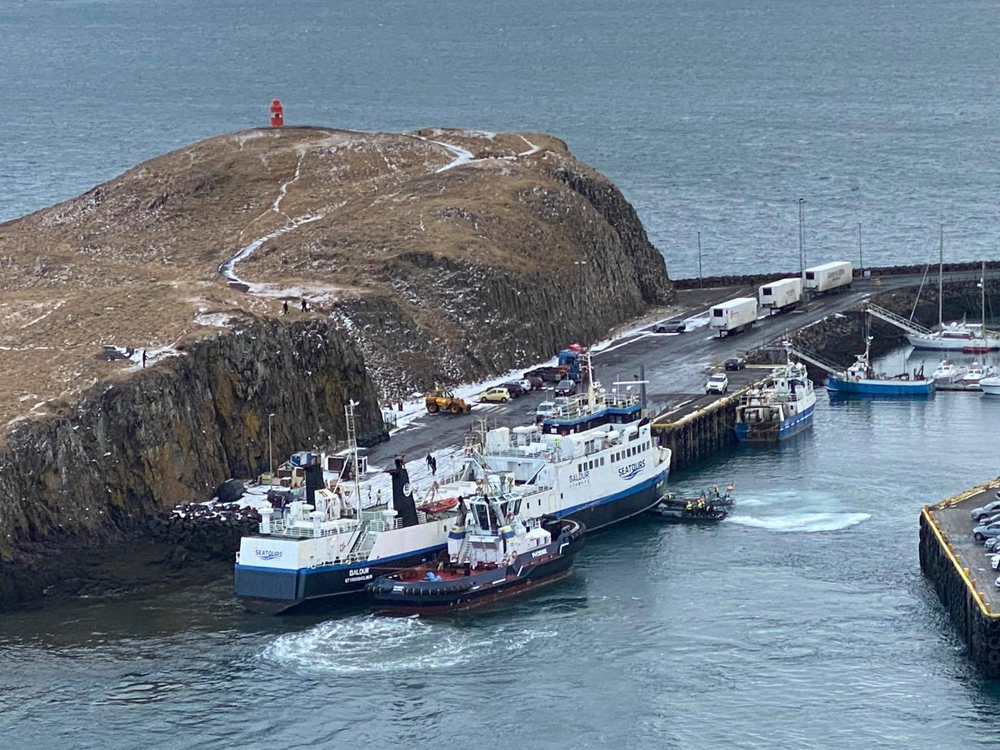 Photos and video courtesy of the Icelandic Coast Guard