Following the protocol signed in April between DEU Marine Sciences and Technology Institute and Izmir Development Agency in order to reveal the underwater cultural heritage of Izmir, the first phase of the work that started with the DEU Koca Piri Reis ship was completed in Foça with the program attended by Izmir Governor Yavuz Selim Köşger.

A new phase has been reached within the scope of the Blue Heritage Project carried out by Dokuz Eylül University in order to determine the shipwreck inventory of Turkey.

Following the protocol signed between Dokuz Eylul University (DEU) Marine Sciences and Technology Institute and Izmir Development Agency (IZKA) in April in order to reveal and protect the underwater cultural heritage of Izmir and bring it to cultural tourism, the first phase of the work started with the DEU Koca Piri Reis ship, The program was completed in Foça with the participation of İzmir Governor Yavuz Selim Köşger.

Stating that they are happy to complete the first phase of the three-stage project that will last for a total of 9 months, DEU Rector Prof. Dr. Nükhet Hotar said that thanks to scientific research, they will both contribute to İzmir’s cultural tourism and map the points where the shipwrecks are located. Reminding that the first studies to unearth the shipwrecks in the Aegean Sea were started in 2016, in line with the permissions obtained from the Ministry of Culture and Tourism, Rector Hotar said, “In the researches we carried out with our Koca Piri Reis ship, side-scan sonar and an advanced ROV underwater robot system that can go down to a depth of one thousand meters are used. dives are made. This project, Marine Sciences and Technology Institute Faculty Member Assoc. Dr. It constitutes a special part of the ongoing ‘Blue Heritage’ researches under the chairmanship of our teacher Harun Özdaş, on the scale of the Izmir coast.”

Rector Hotar noted that 4 shipwrecks thought to be from the 1st World War were found at a depth of 40-70 meters during the studies carried out with side-scan sonar for the potential areas identified in the Izmir Bay, and said, “After this region, the sonar mapping of Foça and its surroundings was carried out. A detailed documentation study was carried out on the Ottoman-era shipwreck discovered in Foça last year. Two iron cannons belonging to the shipwreck were also unearthed, and in one of these cannons 173 o? marks were detected. In addition, intact ceramic plates, jugs and jugs were unearthed. Due to the fact that the shipwrecks in the region are found in deep water, our instructors mostly carry out their studies using advanced underwater technologies. In addition, the distribution of the finds is determined by performing stereo-photogrammetric studies with the ROV.”

Rector Hotar stated that the shipwreck found in Foça carries traces of the Italian warship that sank in the naval war between the Ottoman Empire and Venice, and said, “However, clear information on the identity of the shipwreck has not been reached yet. Our teachers think that these data can be obtained if the excavations are carried out. In addition, the presence of many finds in the shipwreck area increases the excitement of the studies. We aim to start the second phase works in July. Thanks to the project, we aim to draw maps of the areas where sunken ships and other remains are found, and to develop appropriate management methods for İzmir to set an example in this area. To the Governorship of İzmir, İZKA management, especially to our Ministry, Assoc. Dr. We would like to thank our teacher Harun Özdaş and our members.”

Pointing out that the project initiated in cooperation with İZKA and DEÜ is important in terms of diversifying tourism, Governor Köşger said, “We are conducting a study on bringing İzmir’s underwater heritage to tourism and making a new expansion in tourism. As our teachers have stated, Izmir Bay and its surroundings are one of the important riches in terms of underwater tourism. We need to volumize, size and spread tourism to 365 days. The ship Koca Piri Reis, which has played an important role in the maritime history of the Republic of Turkey, has also performed an important function today. A previously unknown shipwreck was discovered off Foça. Two iron cannons, various amphorae, and kitchen utensils were unearthed from here. In the future, studies on shipwrecks will be carried out both here and on other sides. In the next stage, we, as the governorship, will contribute to the establishment of the Naval Wars Museum in Izmir. My Rector Prof. Dr. I would like to thank Nükhet Hotar, academics who took part in the project, and our ship crew. They did a nice job. They reached this conclusion in a short time, and I believe that they will reach even better materials. I wish good luck for Turkey and Izmir,” he said. 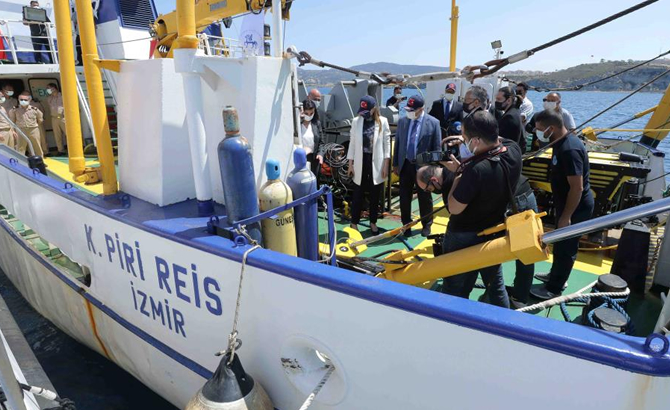 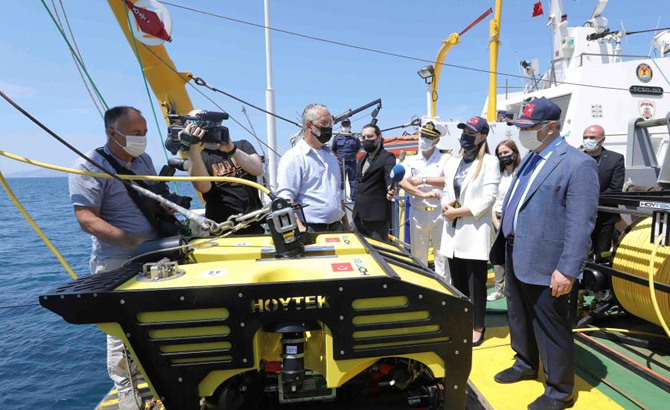