Speaking at the official opening ceremony of NATO Maritime Security Excellence Command, Minister of National Defense Hulusi Akar said, “Although our NATO allies have fought resolutely against terrorist organizations in many regions of the world, unfortunately they have not shown the same determined stance against the PKK/YPG terrorist organization.”

Minister of National Defense Hulusi Akar attended the official opening ceremony of NATO Maritime Security Excellence Command (DGMM/NATO MARSEC COE), which was completed with the approval of the North Atlantic Council (NAC) and attained the status of “International Military Organization”.

The ceremony held at the Multinational Maritime Security Center of Excellence Command in Beşiktaş was attended by Minister Akar as well as TAF command and military officials. The ceremony started with a moment of silence and the singing of the National Anthem.

“IT WILL MAKE SIGNIFICANT CONTRIBUTIONS TO THE SPIRIT OF PARTNERSHIP”

Speaking at the ceremony, Minister of National Defense Hulusi Aka said:

* In addition to sponsoring 14 of 27 centers of excellence, we are very happy to host such an institution.

* With the contribution of NATO and its allies, I believe that the Maritime Security Center of Excellence Command will fill an important gap in training, research, development and interoperability for maritime security operations and will contribute significantly to NATO’s spirit of partnership.

Minister Akar said, “As Turkey, we believe that NATO maintains its reason for existence and NATO’s importance is gradually increasing.”

* It is also among the top five countries in the ranking by participating in NATO missions, operations and headquarters with approximately 3 thousand personnel, including the command structure.

* In addition, it is among the top eight countries that contribute the most to the military budget with approximately two percent of its gross national product.

* I would particularly like to point out that despite its preoccupation with the risks, threats and dangers in its region, Turkey continues to contribute to the alliance’s exercises, force structure and staff uninterruptedly, and does whatever it takes to protect NATO and Europe’s borders against terrorism, smuggling and human smuggling.

“WE ARE NATO COUNTRY THAT HAS THE BIGGEST BURDEN”

Stating that Turkey hosts 4 million Syrian refugees without discrimination, and that it supports 5 million Syrians in northern Syria to live in humanitarian conditions, Akar said that in addition to all these activities, Turkey will become VJTF Land, NATO’s ready power, in 2021. He also stated that he successfully fulfilled his duty as Component Commander.

Akar continued his words as follows:

* Turkey has made numerous calls to its allies to fight together against the actions of PKK/YPG and DAESH terrorist organization in northern Syria, which threaten its national security and regional stability.

* We have repeatedly suggested to our NATO allies the creation of a safe zone in Syria, and together we agreed on some plans. However, these agreements were not fulfilled and Turkey was left alone in the fight against terrorism.

* Turkey is the NATO country that has shouldered the greatest burden to alleviate the suffering of the Syrian people, and the Turkish Armed Forces is the only NATO army that has fought hand to hand with DAESH.

* Our expectation is that our allies cooperate with us in the fight against terrorism, seek solutions to Turkey’s serious security concerns and stand by us.

* We respect the borders, territorial integrity and sovereignty of all our neighbors. We do not have eyes for anyone, their law, their land. Our struggle is against terrorism, against terrorists.

Akar stated that they had a telephone conversation with his US counterpart, US Secretary of Defense Lloyd James Austin, yesterday evening and said:

* However, we are determined, determined and able to protect our rights, interests and interests in our Blue Homeland, including Cyprus. We do not allow any fait accompli

* At a time when the risks and threats to our country were at their highest, we negotiated with our allies for the supply of air defense systems and attempted to purchase Patriot from the USA and SAMP-T from France-Italy. However, this was not possible for various reasons.

* Thereupon, we purchased the S-400 air and missile defense systems from Russia, which met the conditions we wanted. We did not do these in secret, we never had a hidden agenda.

* Our main purpose in acquiring these systems is to defend our country and our 84 million citizens against possible threats from the air.

* We have repeatedly stated that we are ready to address the technical concerns of our interlocutors. We are open and transparent in negotiations. Reasonable and logical solutions are always possible.

* Turkey’s contribution to NATO and NATO’s cooperation with Turkey is much deeper and more comprehensive than the F-35s and S-400s. NATO Secretary General Mr. Stoltenberg has clearly stated this. As a result, NATO, in which Turkey is a member, is more meaningful and stronger and will move forward with more confident steps into the future.

During the ceremony, recorded video messages of NATO officials were broadcast. After the speeches, the ceremony was concluded with ribbon cutting and photographing.

Admiral Adnan Özbal, Commander of the Naval Forces, stated that maritime security requires a global solution approach due to its transboundary characteristics.

With this understanding, Özbal stated that the center, whose establishment works date back to the early 2000s, started its duty as an international military organization affiliated to NATO after a long and intensive establishment and accreditation process, and said, “The Maritime Security Center of Excellence is Turkey’s 2nd and NATO’s It has become the 26th NATO center of excellence. This center will always continue to strive to be a center that can meet NATO’s training and information needs in the field of maritime security.” he said.

Emphasizing that Turkey will continue to contribute to NATO’s deterrence in the field of maritime security, Admiral Özbal stated that the Maritime Security Center of Excellence has great responsibilities in this sense.

Özbal thanked those who supported them in making important contributions to the security of the alliance and the world’s seas and said, “I believe that this center will turn into a center of attraction for NATO maritime security with the contribution of NATO and partner states.” said.

Expressing his wish that the Maritime Security Center of Excellence will turn into an information distribution center with more sponsor countries, Özbal said, “As the host country, I would like to express that we will always support this important institution to achieve its determined goals. The standardization we will provide to allied and partner countries in the field of maritime security. We look forward to your educational contributions with the development of concepts and doctrines. I wish success to the Maritime Security Center of Excellence.”

Akar and the commanders, who toured the center and received information, later joined the family photo shoot. 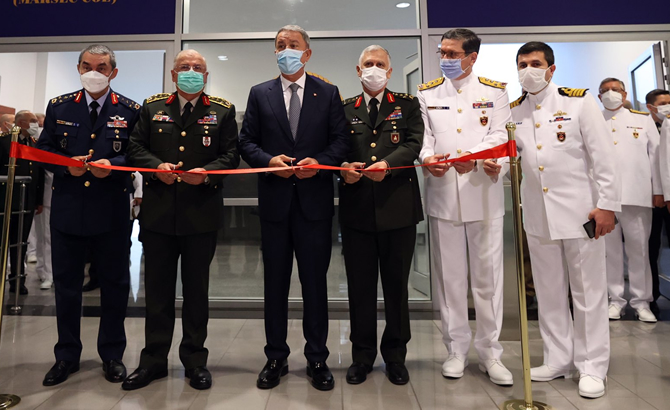 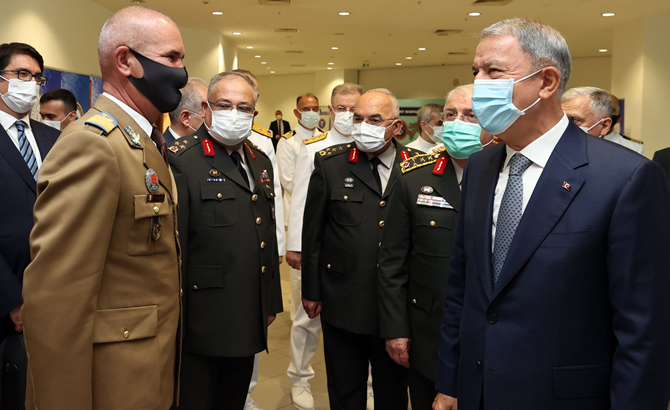 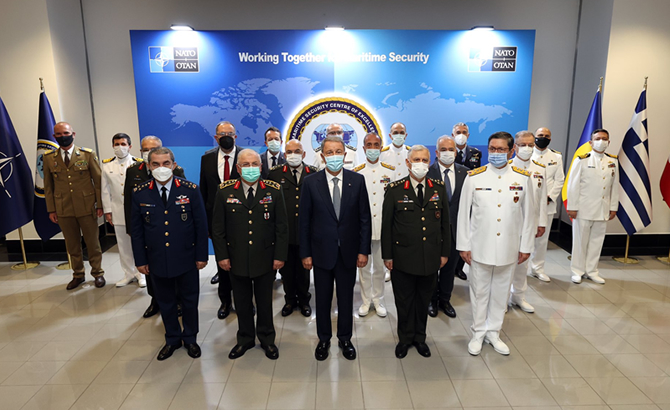 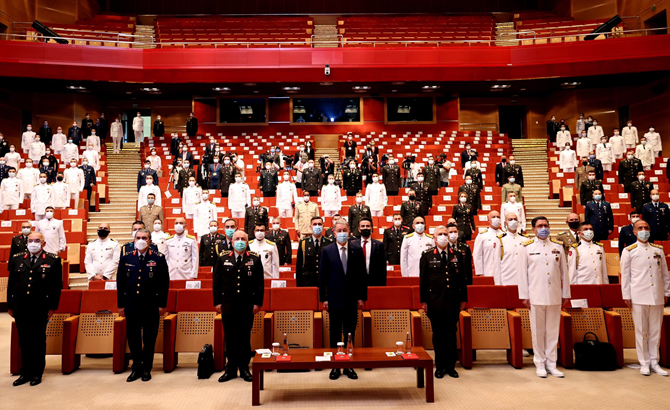 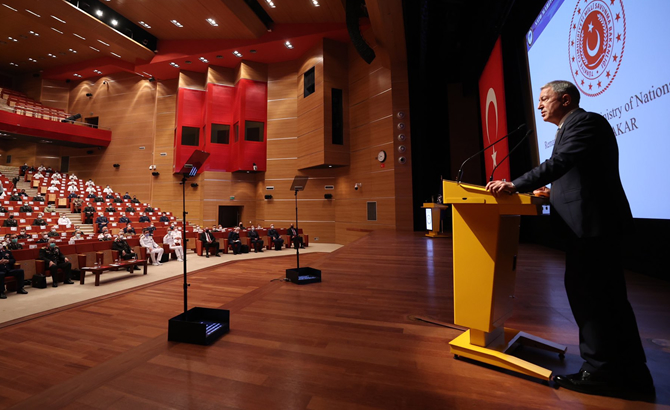 The density of mucilage (sea saliva) seen on the shores of the Sea of ​​Marmara and dragged to the shores by the effect of...
Read more
Turkish Maritime News

In line with the decisions taken by the governorships with the arrival of the summer season throughout Turkey, anglers objected to the decision banning...
Read more