​On March 15, 2020, about 0113 local time, the towing vessel Cooperative Spirit, pushing a 29-barge tow, was transiting downstream on the Lower Mississippi River at mile 121.6 near Luling, Louisiana, when the port side of the tow struck the eastern tower pier of the Hale Boggs Memorial Bridge.

The tow broke apart and began floating downriver. One of the barges sank, while the remaining barges were recovered by the Cooperative Spirit and other towing vessels in the area.

There was no pollution or injuries. Multiple barges in the tow, along with other barges moored along the river banks that were struck by drifting barges, were damaged and required repairs.

Two barges were determined to be total constructive losses. The estimated cost of damages to the barges and cargo was $1.65 million.

The National Transportation Safety Board determines that the probable cause of the contact of the Cooperative Spirit tow with a pier of the Hale Boggs Memorial Bridge was the pilot not effectively compensating for the strong current while navigating a turn and approaching the bridge in high-water condition.

Fatigue and alcohol and drug use were not considered factors in the accident, while the pilot held the appropriate credentials for his position and had extensive experience maneuvering large tows on the waterway.

The pilot stated that, as the tow came out of the turn at 26 Mile Point, the stern of his vessel was too close to the left descending bank, and the current was setting the tow into the bridge pier. About 3 minutes before the accident, the tow’s heading was 124 degrees, while its course over ground was 114 degrees, which is consistent with the pilot’s statement.

Due to high-water conditions, the current was stronger than normal, and an eddy may have formed upriver of the bridge along the left descending bank, making maneuvering more difficult. Although the pilot stated that he used starboard rudder and increased engine speed in an attempt to counteract the current, the video evidence showed that he used limited rudder as the tow approached the bridge.

The pilot chose to primarily use increased engine speed in an effort to move the tow to starboard away from the bridge pier, stating that he “tried to outrun [the current].” However, the tow’s course over ground did not appreciably change as engine speed increased, while the increasing speed over ground reduced the time the pilot had to maneuver.

Ultimately, the pilot’s actions in compensating for the strong current were ineffective, resulting in the tow hitting the bridge’s eastern tower pier. 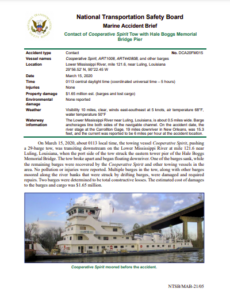