Adil Karaismailoğlu, Minister of Transport and Infrastructure, who walked from Anatolia to Europe through the cat path on the 1915 Çanakkale Bridge and signed historical moments, said, “Our 1915 Çanakkale Bridge will almost seal the Dardanelles as the project of the ‘thems’ and will be one of the landmarks of our country. said.

Minister of Transport and Infrastructure Adil Karaismailoğlu examined the 1915 Çanakkale Bridge and walked from Anatolia to Europe through the cat path on the bridge.

Noting that the 1915 Çanakkale Bridge is one of the rare bridges designed as two decks, Karaismailoğlu said, “Only the assembly of the decks near the towers remains. Now we can say that the countdown has begun for ‘The Dream of Centuries’. It is within the scope of Kınalı-Tekirdağ-Çanakkale-Savaştepe Highway Project with a length of 101 km. It is 3,563 meters long with 2 thousand 23 meters of middle span and 770 meters of side openings. The 2,23-meter middle span symbolizes the 100th anniversary of the foundation of our Republic, and when completed, it will have the title of the world’s largest mid span suspension bridge. With the approach viaducts of 365 and 680 meters, the total passage length reaches 4,608 meters. The 318-meter steel towers of our bridge will mark March 18, 1915, when the Çanakkale Naval Victory was won. Our Bridge between two steel towers is one of the rare suspension bridges designed as twin decks in the world. When completed, it will go down in history as the first bridge in the world to be designed and built as a twin deck over a 2,000-meter middle span. Considering the 318-meter tower height and 16-meter architectural cannonball figure, it will reach 334 meters above sea level and will be the suspension bridge with the highest towers in the world. In short, our 1915 Çanakkale Bridge will literally seal the Dardanelles as a project of the ‘best’ and will become one of the landmarks of our country.”

Noting that the deck of the bridge with 2 x 3 traffic lanes was designed as twin decks with a width of 45 meters and a height of 3.5 meters, Minister of Transport Karaismailoğlu said, “The Suspension Bridge Tower Foundations rest freely on the improved seabed at a depth of -45 meters on the Asian side and -37 meters on the European side. 1915 in Çanakkale; There are many important manufacturing items in terms of construction technique such as caisson manufacturing in dry dock and wet dock, plinth and tie beam manufacturing, anchor blocks, tower assembly, main cable assembly, deck assembly and superstructure works.

Pointing out that 162 thousand kilometers of steel wire was used on the bridge, that is, enough to rotate around the world four times, Karaismailoğlu said, “The stability of the bridge was tested against the most unfavorable wind effects that will occur both during the operation period and during the construction, and it has successfully passed these tests.”

Karaismailoğlu noted that the tower foundations of the bridge were strengthened with steel piles against possible major earthquakes and the submerged caisson type foundation positioned on the ground was chosen.

Emphasizing that 2,332 billion euros were spent on the construction cost and 579 million TL in the expropriation works by the Company in Charge, Minister of Transport Karaismailoğlu said, “Sea bottom dredging works were carried out in the area where the tower caissons are located. A total of 368 steel piles with a diameter of 2.5 m, 165 in the South Tower and 203 in the North Tower, were driven for soil improvement on the sea floor in the area where the tower caisson foundations are located. The main cable productions were completed, the assembly works of the main cable consisting of 304 Wire Bundles were started on February 5, 2021, the assembly, pre-compression and final compression works, as well as the assembly works of the suspension clamps and vertical suspension ropes were completed. Deck panels and blocks were manufactured. 66 mega blocks and 21 single blocks were transferred from Gölcük Çimtaş Facilities to the Deck Stock Area in the Gelibolu Dry Dock Region. Until today; Installation of a total of 70 deck blocks, 38 in the middle opening and 32 in the side openings, was completed. The Asian Approach Viaduct with a length of 680 meters and the European Approach Viaduct with a length of 365 meters have been completed, which was built with the push-slide method.

Emphasizing that the works are continuing rapidly in 1 bridge, 4 overpasses, 1 box culvert, 8 intersections, 4 highway service facilities and 2 maintenance operation centers, Minister of Transport and Infrastructure Karaismailoğlu said, “Approximately 5 thousand 100 personnel and 809 construction machines and 7/24 As a result of our work, which we have successfully carried out on a working principle, we are tireless for our project to be put into service on March 18, 2022. Like roads and streams, it gives life to every place it passes. Every new road built, like rivers, adds life to the employment, production, trade, culture and art of the places they pass through.

Stating that they connect the Marmara and Aegean regions, which form the backbone of the Turkish economy, with a full highway network, Minister of Transport Karaismaioğlu said that they opened the Northern Marmara Highway, which is 400 km long, including the Istanbul-İzmir Highway and the Yavuz Sultan Selim Bridge, to traffic.

TRANSITION TIME WILL BE REDUCED TO 6 MINUTES

Emphasizing that the 1915 Çanakkale Bridge and the 101-kilometer-long Malkara-Çanakkale Highway will be put into service, the Marmara Highway Integration will be fully achieved, Karaismailoğlu made the following assessments:

“The 1915 Çanakkale Bridge will reduce the time to cross the Dardanelles Strait, which takes 30 minutes by ferry, but often takes hours depending on the waiting time and weather conditions, to 6 minutes. When the project is completed, annual time savings will reach 624 million liras and fuel savings will reach 113 million liras. In short, we will save a total of 737 million liras every year. We can say that there will no longer be vehicles that stop and go due to long queues, causing serious fuel wastage and air pollution. In addition, the 1915 Çanakkale Bridge and Malkara Çanakkale Highway Project will be an important alternative to Istanbul in freight and passenger transportation, especially in the Aegean, the west of Central Anatolia, the Adana-Konya axis, and the Western Mediterranean and Thrace-Europe. With the connection of the highway to the Istanbul-Izmir Highway in the vicinity of Balıkesir, the distance between tourism centers such as Izmir, Aydın and Antalya with European countries will be shortened and will lead to development in the tourism sector. The 1915 Çanakkale Bridge will provide the integration of ports, railway and air transportation systems in the Marmara and Aegean regions with road transportation projects. In short, due to the location of the bridge, our Project will connect not only the two sides of the Bosphorus, but also millions of people in the region and in geographies connected with the region in every sense.”

“One of the most important elements of our vision for the future is to contribute to the competitiveness of our country and to improve the quality of life of the society; Karaismailoğlu said, “to create a safe, economical, comfortable, environmentally friendly, uninterrupted and sustainable transportation system” and noted that in this context, they further clarified the picture of Turkey they aim to see in the future.

Minister of Transport Karaismailoğlu said, “We have an ambitious process that is shaped by mobility, digitalization and logistics dynamics focused on holistic development, and aims to integrate the world into our geography, and we successfully manage this process in every mode of transportation. The 1915 Çanakkale Bridge will provide serious benefits to the development of both the region and Turkey. Our people will win with the industry, trade, agriculture and service sectors that our project will accelerate. 1915 Çanakkale Bridge will inspire new technical breakthroughs both in our country and in the world. 1915 Çanakkale Bridge is far beyond being a project that serves transportation, trade and development goals. This work is a unique monument that carries the memory of our martyrs; It will be a gift to our ancestors who wrote an epic,” he said. 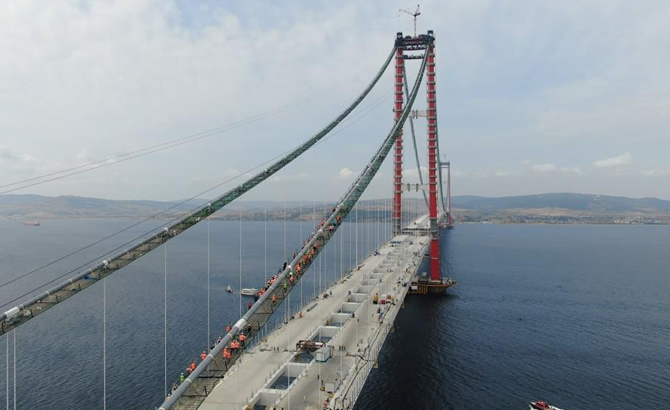 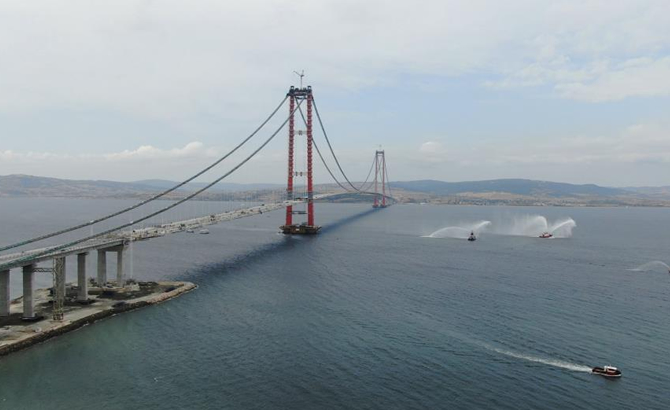 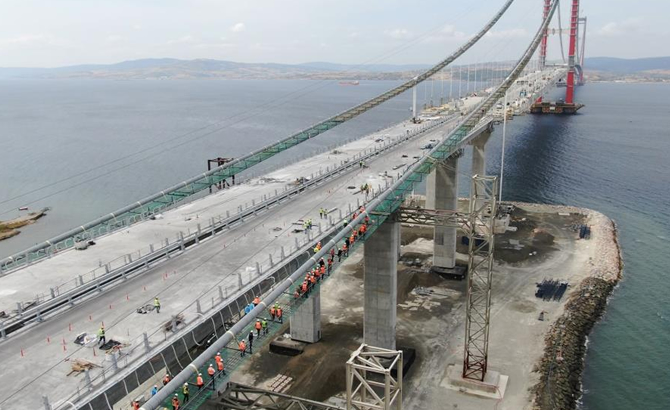 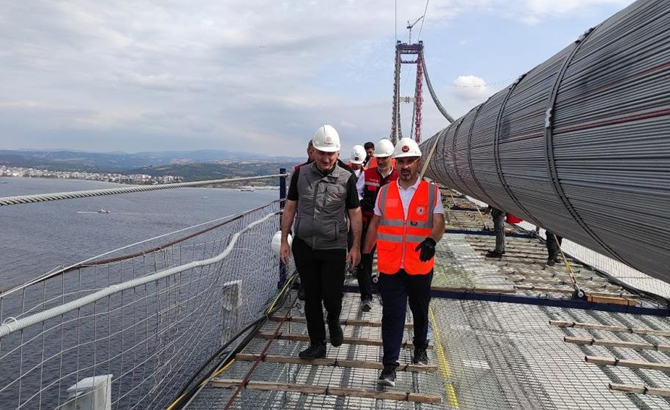 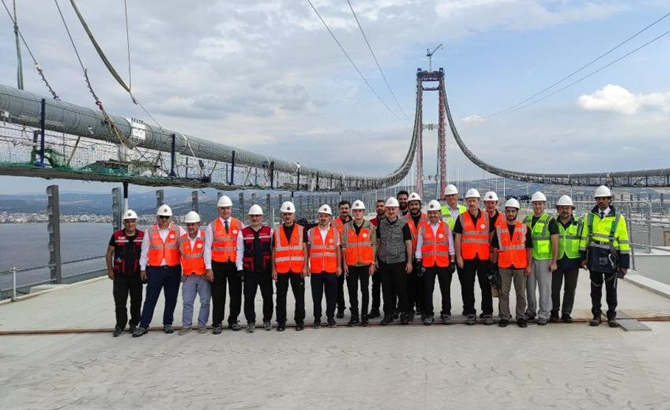